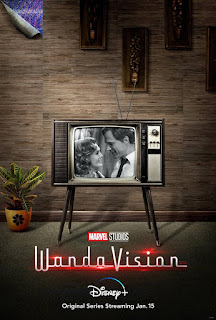 WandaVision Review -  Disney Plus
Welcome to my review on the brand new release from Marvel that has just streamed its first couple of episodes on Disney Plus.
Wandavision is the first TV Series release from Marvel and set a good pace with it's first two episodes. The concept is different to what you would expect from the films but I think we are in for a great series. Already there have been Easter eggs for fans to spot whilst we try and work out where the next episodes will take us.
The story starts with Wanda and Vision starting their new life and settling in to their new home. Over the coming episodes we will get to see more of the new cast which I am looking forward to as there are some familiar faces on the way.
If you haven't watched the live stream of the launch check this out on You Tube as the cast were on hand to give a bit more of an idea of what's to come. WandaVision - Virtual Launch
Whilst it has been confirmed there will be no end credits clips like you would have in the film I do feel that they could have given a few more minutes to the show as 7 minutes of credits is a lot.
All in all I think this is going to progress into a good series and am looking forward to seeing the next part of the story. Let me know below if you have the seen show and what our thoughts were.