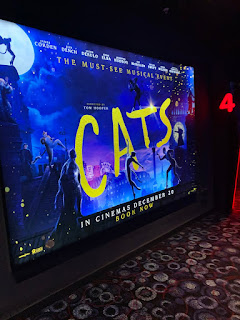 Firstly a big Happy New Year and Welcome to 2020

Now I have to say there were high hopes for this film after the trailer release earlier this year. From an incredible star studded cast including Judi Dench, Taylor Swift and Ian McKellen it was billed as the film not to miss for the festive season for 2019.

Sadly it has not hit the mark that it was forecast to achieve. From its release week it was hit with problems and negative reviews that spread throughout the press and social media. Once the story broke that a second version of the movie had been rushed into cinema's it seemed to seal the films fate with people looking for mistakes and errors within the film.

I went to the see the film before Christmas with my boyfriend and we both agreed after that it wasn't what we had expected. Parts of the story had been changed from the stage show which just looked odd on screen and didn't fit. Whilst we couldn't fault the soundtrack and the choreography it felt as though with some parts things had been tried too hard and some had not.

It should have been a massive hit but it just seems this musical classic had all the odds against it which has been a shame. I would say if you are a fan of the show give the film a chance and not go on the reviews and make your own mind up on the film.

Let me know in the comments below if you have seen the film and what your thoughts were.
Love Holly
x